This post may have affiliate links. If you click one of these links and make a purchase, we will be paid a commission at no additional cost to you.

I’ve mentioned before that I grew up in a large family.  There were always baby showers, bridal showers, family get-togethers and all sorts of various other family gatherings several times a year.

I was with one of my friends who was pregnant with her second child about a year ago.  She was telling me how expensive it was to have a baby.  Her son at that point was 5 years old and they weren’t exactly expecting to get pregnant and had gotten rid of all their baby gear.

I asked if she was having a baby shower and she said there wasn’t anyone to throw it for her. I immediately offered to, but she didn’t want to have one.  She felt it was too late at that point and it was their second baby, so she felt like she shouldn’t have one.

I was talking to my cousin about this at (surprise, surprise!) a bridal shower and she was telling me about a friend of hers who was planning to throw a baby shower, but had never been to one, so didn’t know how.

So I thought I’d write up how to throw a baby shower.  The gist is pretty much the same for bridal showers, but the games are different.

The main things you need to plan for your party are: location, invitations/invite list, decorations, food, games and presents. 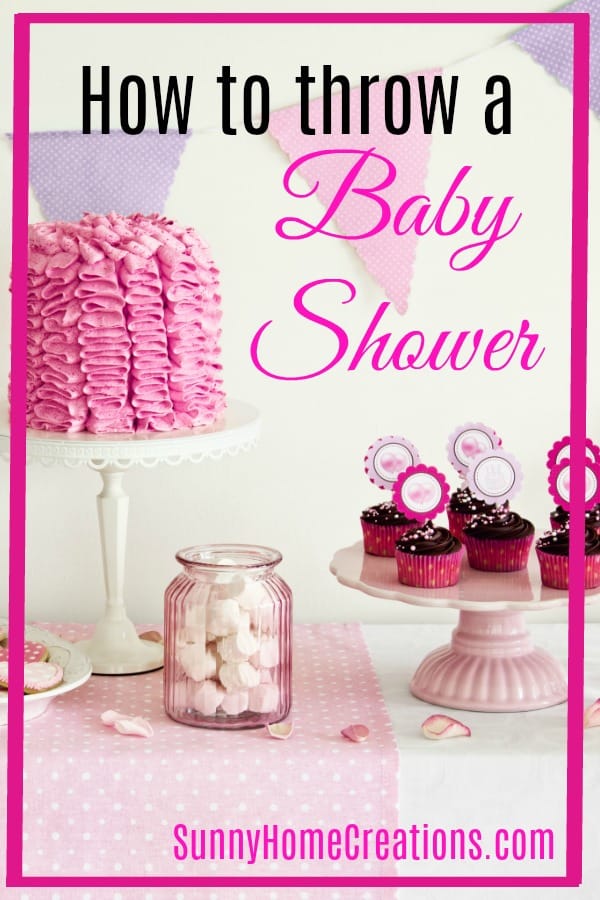 This tends to be at your house.  You can choose to do this somewhere else if preferred or if space is an issue.  I’ve also been to a couple shower’s where the shower is hosted at the guest of honor’s house but thrown by someone else.

I’ve thrown a baby shower for my sister at my Aunt’s house.  My house was small and the guests would have been really cramped there.  I asked my Aunt if she would mind, since she has a large house and she was totally fine with it.

If space is an issue – get creative!  Check to see if there are any museums, libraries, restaurants, parks, hotels or even the local grange might be a good spot.  Some other ideas might be with your local park & rec (sometimes they have a room they’ll rent for fairly cheap) or the local YMCA/gym.  If you live in an apartment, many times they have a large common room that you can rent out.

Looking for a gift to give the Mom to be?  If you use the code “SUNNYSAVE40” at www.nursingpillow.com you will get $40.00 off.  If you purchase a nursing pillow, this will make it FREE!  I used my nursing pillow pretty much every single time I nursed my kiddos.

You will need to get the guest list from the person you are throwing the shower for.  Normally this includes all their female relatives and female friends.  Including the names, you should also have the addresses for where to send the invites to.

If there are a ton of people on the guest list, I’ve seen showers broken up into several different parties.

In my family, we’ve had it broken up into a party for friends and coworkers and then another for each side of the family.  The guest of honor will figure out what works best for her and normally it isn’t the same person throwing each party.

Many times (not all) the invites match the theme of the decorations.

You want to make sure to send out the invites early enough that people can plan to attend.  This tends to be about 4-6 weeks before the shower.  Make sure to include a place for the guests to RSVP to.  Emails, texts and phone calls are all ways they can get ahold of you to let you know if they are attending.

Make sure to follow up with anyone who hasn’t RSVP’d about a week or two before the party date.

Decorations can be as simple as some streamers and balloons or more extravagant with diaper cake and other specially created decorations.

Make sure to know what and how you are going to decorate for the shower.  There are many fun ideas on Pinterest for baby shower theme ideas.

Also, I’m including this with decorations because if you purchase at a party store, you will buy it at the same time. Make sure you also have plates, napkins and cutlery for guests for the food and cake.

Depending on the time you throw the baby shower will depend on what food you provide.  Most of the time, the shower is held in the afternoon between lunch and dinner.  This way you aren’t responsible for providing a meal, but you can have some appetizers out for people to munch on.

A cake is normally served at a baby shower.  It typically has some sort of cute baby-ish decoration on it and might match the decorations of the party with either color or design, but doesn’t have to.  I’ve also been to showers with cute cupcakes or mini cupcakes served.

There are a ton of games that you can play.  For most games it is best to have all the guests sit in a circle while playing the games.

Here are few of my favorite baby shower games:

You buy 15ish jars of baby food.  With a sharpie label the top with a number

On a sheet of paper write down the number and what the food is.  Applesauce, pureed plums, etc.

Take the label off the jar.

Arrange the jars on a tray.

When it’s time to play, pass out a pen and piece of paper to each person.  They are to write down what they think each jar of baby food is and match it to the correct number on their paper.

You will start by passing the first jar of baby food to one person, they will write down what they think it is and pass the jar to the next person, then do the same with the next jar.  The game continues like this until all the jars are passed around the circle.

After everyone has written their answers.  You will hold each jar up, in order 1 through however many you have and say what they are.

Whoever has the most right, wins a prize.

Guess Which Candy It Is

This one is a lot of fun and kinda gross. You need an assortment of candy and a pack of newborn diapers.

For this game, you are going to open up each candy bar and place it in a separate diaper.  You want to slightly smash each piece of candy and it helps if you heat the candy up slightly.  Label each diaper 1 through however many pieces of candy you have.  Create a cheat sheet as you are doing this with each diaper number labeled with the type of candy in that diaper.

When it’s time to play the game, each diaper is passed around the circle.  Each person should have a piece of paper and pen/pencil.  They will number their paper (or you can create numbered papers to pass out beforehand) and they write down what candy they think is in each numbered diaper.

You will read off the correct candy for each number at the end.  Whoever has the most correct wins the game.

If the guest of honor is sensitive about her baby belly, you don’t want to do this game.

You pass around a ball of yarn and scissors.  Everyone cuts a piece of string at the size they think would fit around the guest of honor’s belly at the largest part.

When everyone is done, the guest of honor puts each string around her belly one by one (keeping track of whose string it is) and the closest one is the winner.

This is a new one that I played recently that was a lot of fun.  You go out and buy some basic baby gear (about 10ish items) – a bottle, pack of bibs, packet of blankets, set of onesies, baby socks, etc.  Make sure to get and keep the receipt for this purchase.

Take the prices off of everything.

For the game, each person will get a pen and a piece of paper.  They are going to list the item and how much they think it costs.  It helps if the host holds it up and says what the item is for each thing so everyone has everything in the same order.

After you have shown all the items and everyone has had a few minutes to go back through their list and fill in any missing prices.  Then, hold up each item again and let them know the price you paid.

The person who gets the most items correct is the winner.  The guest of honor then gets to keep all these baby items.

I’ve seen all sorts of items as prizes.  Most recently $5 cash.  But, normally there is a gift such as a plant of some sort, or a small gift basket with food or bath & beauty items.  There’s been a bottle of lotion, a candle, pretty much anything that seems “personal” and small.  Like $5 is the most spent on these gifts (at least in my family). 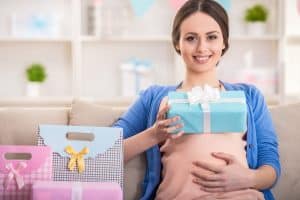 When the guest of honor is opening up each gift, you will write down each item she receives and who it is from so she has an easy way to write her thank you cards.

On the day of the party – you’ll want to bring the food out just before the guests start to arrive.  If the item is something that is perishable, make sure to take this out last.

Put as many chairs as there are guests (and you) in a circle.  This is where everyone will be sitting while playing games and when the guest-of-honor opens her gifts.

Make sure to put all the decorations up before the party.  Plan that this will all be done several hours beforehand or the day before.

Make sure to have a spot, such as a table to put all the gifts.

Any games that you are planning to play should be set up before the day of the party if possible.  All the supplies should be purchased and gathered together and any prep for the games should also be done before time.

Flow of the Party

To give you an idea of how the party flow might go.

As guests arrive they will want to place their gifts at the gift table.  As well as place purses and coats somewhere out of the way (many times we use a bedroom for the purpose.  Coats can be placed on the bed)

Plan that people will be arriving for the first 15-20 minutes of the party.  Generally, the food will already be out when the guests arrive.  They can nibble on the food while others arrive.

When you are ready to start the games – about 15-20 minutes after the party has started, you can ask the guests to come sit down.  If not everyone knows each other, you can go around the circle and everyone can introduce themsselves and how they know the guest of honor.

Then you’ll start the games.

After the games, you can serve the cake and after or during the cake you can do the presents.

I hope this gives you some ideas on how you can hold a baby shower.

If you liked this post, I’d love for you to Pin it! 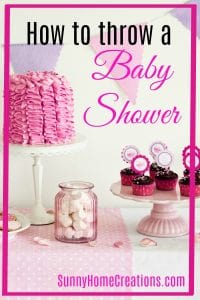